from her recent show

The Living Sky and the plight of birds 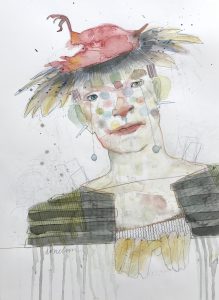 2018 has been declared the Year of the Bird by National Geographic and The Audubon Society. What better timing for Deborah Donelson to celebrate her own passion for helping birds than with this new body of work – her first in over eight years.

As a supporter of the excellent work being done by Lights Out Baltimore, Deborah has invited its Outreach Coordinator, Lynne Parks, to contribute some of her powerful photos to the exhibition. Lynne will be giving a presentation on Sunday, September 16th at 2pm about the mission of LOB and related groups to make Baltimore a safer city for migratory birds. And the Phoenix Wildlife Center will have a live bird on hand starting at 1pm Sunday.

As proof of her commitment to this important work, Deborah Donelson will be donating 10% of her sales to LOB. And the Patterson Park Audobon Center will be available to provide information to gallery goers the night of the artist reception, September 15th.

Lights Out Baltimore (LOB) was formed by a group of concerned birdwatchers in the Baltimore Bird Club who have seen firsthand the toll lights and windows play on birds. Their goal is to make Charm City safe for migratory birds by turning out decorative lighting in the city during peak migration seasons, between the hours of 10 p.m. and 6 a.m., and to advocate for bird-safe building design that makes glass and windows visible to birds. LOB is both a bird conservation and wildlife rescue organization. They also monitor downtown Baltimore for bird collisions and transport injured birds to a wildlife rehabilitator.

Lynne Parks presents her talk at 2pm on Sunday September 16th to promote awareness of the plight of birds, and by invitation of The Living Sky artist Deborah Donelson, Lynne will also show her memorial photography of birds who have died from collisions with glass. And the Phoenix Wildlife Center will have a live owl on hand starting at 1pm.